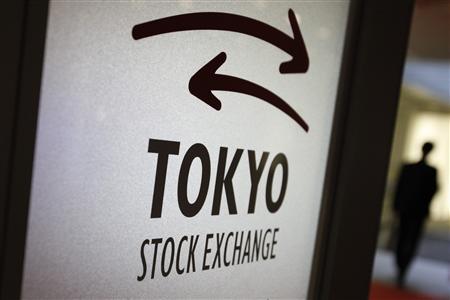 (Reuters) – Asian shares rose on Wednesday buoyed by strength in global equities markets, firmer economic sentiment in Germany and hopes of a deal from U.S. budget talks, while the dollar came under pressure ahead of the Federal Reserve’s policy decision.

Australian shares .AXJO were up 0.4 after touching a nearly 17-month high on the back of Wall Street gains and higher iron ore prices.

“Definitely the momentum is to the upside,” said Stan Shamu, a market analyst at IG Markets. “Everyone seems to be pricing in a fairly positive outcome to the fiscal cliff negotiations as well.”

“North Korea is no longer an economic match for the South, so, short of a full-scale conflict, the North’s actions will have little impact on the KOSPI,” Im No-jung, chief economist at IM Investment & Securities, said of the Seoul stock market.

North Korea launched the second rocket this year on Wednesday just before 10 a.m. and may have finally succeeded in putting a satellite into space, the stated aim of what critics say is a disguised ballistic missile test.

The dollar remained broadly under pressure on expectations the Fed will take further monetary easing step, pushing the currency down to a three-month low against the Australian dollar. The euro popped back above $ 1.3000, pulling away from a two-week low of $ 1.2876 plumbed Friday.

The Fed is expected to announce it will buy $ 45 billion per month of longer-dated Treasuries beginning in January on top of the $ 40 billion in mortgage-backed security purchases it announced in September. The new buying will replace the Fed’s current program, Operation Twist, which expires at the end of December.

“Although the view that the Fed will shift to outright Treasury purchases is now very widely shared by market participants, we do not believe it has been fully reflected into markets or in positioning,” said Vassili Serebriakov, a strategist at BNP Paribas.

Against the yen, the dollar steadied at 82.54 yen. The Japanese currency has also been pressured by expectations for more easing from the Bank of Japan, which meets next week.

Data on Wednesday showed Japan’s core machinery orders rose 2.6 percent in October from the previous month, up for the first time in three months but below a 3 percent rise forecast, highlighting how uncertainty over the global outlook continued to weigh on business investment and the broader economy.

Investors also closely followed developments in U.S. budget talks to avert the “fiscal cliff,” some $ 600 billion of tax hikes and spending cuts scheduled to start in January, which economists have warned could send the U.S. economy into recession and drag down the fragile global economy.

Negotiations to avert the “fiscal cliff” ahead of a year-end deadline intensified as President Barack Obama and U.S. House of Representatives Speaker John Boehner spoke by phone on Tuesday after exchanging new proposals, in a possible sign of progress ahead of the end-of-year deadline.

A group of high-profile chief executives urged President Barack Obama and Republican congressional leaders on Tuesday to strike a deal, reflecting mounting urgency to resolve the issue with time running out.