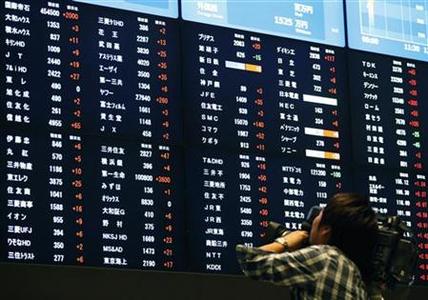 (Reuters) – Asian shares slid on Friday after a Republican proposal to fend off a U.S. fiscal crunch failed to get enough support, deepening uncertainty over prospects for the negotiations to avert automatic spending cuts and tax increases set to start in January.

“Markets disliked signs of further delay in talks, with the risk that a deal may not be reached by the end of the year deadline,” said Yuji Saito, director of foreign exchange at Credit Agricole in Tokyo. “It clearly hit risk sentiment.”

That sparked selling in Asian shares, with MSCI’s broadest index of Asia-Pacific shares outside Japan .MIAPJ0000PUS wiping out earlier gains to tumble 0.7 percent.

Boehner’s proposal was aimed at extracting concessions from the White House, which had threatened to veto it, and advance talks closer to a deal.

The Republican-led U.S. House of Representatives, which abruptly recessed on late Thursday, may return as soon as December 27 with a yet-to-be-decided new plan, said a senior party aide.

“This is a major setback for a Fiscal Deal compromise between the two parties. I would say that chances of a deal are down to maybe 40 percent from 65 percent — despite the dysfunction in Washington D.C,” said Douglas A. Kass, founder of hedge fund Seabreeze Partners Management Inc.

Risk assets were sold off, from shares, oil to currencies such as the Australian dollar and the euro, while the yen firmed slightly, though it was pinned near multi-month lows versus the dollar and the euro on expectations for more aggressive Bank of Japan easing next year to drive the economy out of deflation.

“Investors are disappointed by the latest development on fiscal talks. The market will continue to be swayed by the state of U.S. budget negotiations,” Kim Soo-young, an analyst at KB Securities, said of Seoul shares .KS11 which led the declines in Asia with a 1.1 percent fall.

Inflows into U.S. Treasuries underpinned the U.S. dollar, which inched up 0.2 percent against a basket of major currencies .DXY.

“Treasury yields will likely fall in Friday morning and will begin to reverse course in the afternoon as investors become more optimistic a deal will be reached,” Barnes said.

“So far, the market has been handling set backs in negotiation talks very well. With still a little bit of time left on the clock, this time around will be no different.”

Along with uncertainties surrounding the future of U.S. budget talks, a firmer dollar also weighed on dollar-based commodities.

Anxieties over the U.S. budget negotiations also took their toll on Japan’s Nikkei average .N225, which had been supported by a weaker yen. The Nikkei lost all gains to ease 0.3 percent, although the drop was relatively modest compared to many other Asian bourses. .T

The yen was kept under pressure after the Bank of Japan further eased monetary policy as expected on Thursday, with investors anticipating that the central bank will be persuaded to pursue more drastic measures next year.

Incoming prime minister, Shinzo Abe, has called for bolder action by the central bank to help bring Japan out of decades-long deflation.

For all the fears of a fiscal cliff debacle to come, several data series showed the United States remained on a recovery track, helping to underpin the U.S. currency.

The world’s largest economy grew at a faster-than-expected 3.1 percent annual rate in the third quarter, while other data on Thursday showed factory activity in the mid-Atlantic region picked up this month and home resales in November were the best in three years.

The improving U.S. economy and a stabilizing Europe eroded the appeal of gold as a crisis hedge, triggering a technical sell-off and heavy liquidation by hedge funds before the year-end.

(Additional reporting by Hyunjoo Jin and Chang Seong-won in Seoul and Masayuki Kitano in Singapore and Jennifer Ablan in New York; Editing by Simon Cameron-Moore)