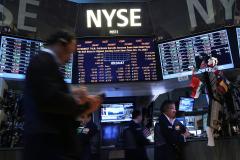 Markets were incredibly volatile Wednesday, eventually closing significantly lower. Equities shot down after the Fed’s minutes were released, and quickly recovered before tanking to end the day.

Equity, commodity, and bond markets responded strongly to the minutes initial release at 2:00 pm. Equities and gold spike down with the Dow testing 14,900 sending treasuries significantly higher. Investors seem most concerned over tapering uncertainty and few defendants of dovish policy.

Oil took another hit today as delivery date nears and traders roll their contracts forward to future months. WTI was down 1.11 percent to $ 103.94 with Brent down 0.25 to $ 109.88. This is an especially large gap. Natural gas gained value today, jumping up 0.58 percent nearing the close.

There was little change in the metals market with gold and silver down 0.15 percent, and silver up 0.12 percent, respectively. Copper futures were down almost half a percent heading into the equity market close to $ 332.40 per pound.

The greenback was especially volatile today with the release of the FOMC minutes (just like everything else). The PowerShares DB US Dollar Index (NYSE: UUP) that tracks the strength of the dollar versus a basket of currencies was up 0.46 percent nearing 4 pm.

The CBOE Volatility Index (VIX) rose a little less than four percent on the session. The closely watched barometer of volatility expectations finished the day at 15.48. This is the highest its been in over a month.
Volume remained lighter than usual on Wednesday. Around 27 million SPDR S&P 500 ETF (NYSE: SPY) shares traded hands compared to a 3-month daily average over 100 million shares.

Incyte (NASDAQ: INCY) moved up 33.48 percent to $ 36.04 on positive top-line results of Phase II proof-of-concept trial of ruxolitinib.
Lowe’s (NYSE: LOW) rose, shooting up 3.93 percent to $ 45.81 after reporting strong earnings. Second quarter earnings were up 26 percent and the company raised its forecast.
Trina Solar (NYSE: TSL) traded up, gaining 14.71 percent to $ 8.97 after Cowen & Company upgraded the stock from Market Perform to Outperform.
Staples (NASDAQ: SPLS) slipped 15.29 percent to $ 14.27 after the company reported weaker-than-expected second-quarter earnings.
American Eagle Outfitters (NYSE: AEO) picked up the retail trend with a weak profit view for the quarter. Shares tumbled 9.89 percent to $ 14.76.
Target (NYSE: TGT) was down 3.16 percent to $ 65.50 after the company reported a drop in its second-quarter profit.