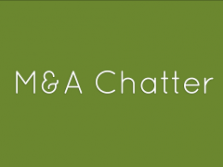 The following are the M&A deals, rumors and chatter circulating on Wall Street for Monday December 31, 2012:

Duff & Phelps to be Acquired by Private Equity Consortium for $ 15.55/Share in Cash

The Deal:
Duff & Phelps (NYSE: DUF) announced Sunday that it had entered into a definitive merger agreement under which a consortium comprising controlled affiliates of or funds managed by The Carlyle Group (NASDAQ: CG), Stone Point Capital LLC, Pictet & Cie and Edmond de Rothschild Group will acquire the company for $ 15.55 per share in cash in a transaction valued at approximately $ 665.5 million.

The transaction is expected to close in the first half of 2013.

The Deal:
Starbucks (NASDAQ: SBUX) announced Monday that the company’s planned acquisition of Teavana Holdings (NYSE: TEA) has formally closed, making Teavana a wholly-owned subsidiary of Starbucks. Starbucks acquired Teavana for an aggregate acquisition price of approximately $ 620 million in cash and is expecting the acquisition to be accretive to earnings by approximately $ 0.01 per share in fiscal year 2013, based upon the previously announced earnings targets. Teavana shareholders of record will receive $ 15.50 per share in cash.

Starbucks closed at $ 53.63 Monday, a gain of almost 2% on lower than average volume.

The Deal:
The Middleby Corporation (NASDAQ: MIDD) announced Monday the acquisition of Viking Range Corporation (“Viking”) for $ 380 million in cash.

A conference call has been scheduled for 10:30 AM ET on January 2, 2013 to discuss the Viking acquisition.