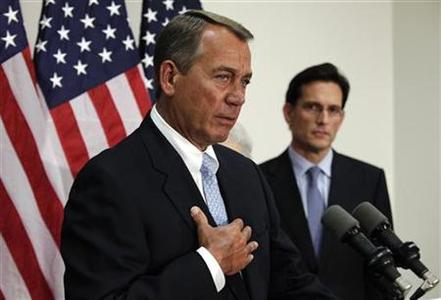 (Reuters) – House of Representatives Speaker John Boehner said there was no progress on Thursday in “fiscal cliff” talks with U.S. Treasury Secretary Timothy Geithner and criticized President Barack Obama and Democrats for failing to “get serious” about including spending cuts in a final deal.

Geithner, Obama’s chief negotiator in talks to avert the “fiscal cliff,” held a round of meetings with congressional leaders on Thursday but the sessions appeared to move the two sides no closer to a deal to avoid the tax hikes and spending cuts to be triggered on January 1 without an act of Congress.

“Based on where we stand today I would say two things. First, despite the claims that the president supports a balanced approach, the Democrats have yet to get serious about real spending cuts,” Boehner, of Ohio, said after the private session with Geithner.

“And secondly, no substantive progress has been made in the talks between the White House and the House over the last two weeks,” he said.

Markets dipped briefly into negative territory on Boehner’s comments, continuing what has become a pattern of gyration based on the latest utterance or headline about the outlook for an agreement on the cliff.

In the absence of progress, or any realistic understanding as to when or if Republicans and Democrats might avert the cliff or come up with some deficit reduction agreement, prodding is now coming on a regular basis from business leaders as well as Federal Reserve officials.

New York Fed President William Dudley and Richard Fisher from the Dallas Fed, highlighted the problems Thursday that U.S. lawmakers are causing for both hiring and the economy with each day they fail to strike a deal to avoid a pending fiscal crisis.

Dudley warned that, if it is not addressed, the economic contraction is likely to be larger than normal because interest rates are so low.

Geithner met with Boehner and other House Republican leaders after a session with Senate Democratic leader Harry Reid, of Nevada. He later plans a lunch with Republican Senate Minority Leader Mitch McConnell of Kentucky followed by a meeting with House Minority Leader Nancy Pelosi of California.

Congressional budget analysts have warned that the fiscal cliff’s approximately $ 600 billion in tax hikes and spending cuts that would begin in 2013 would push the U.S. economy back into recession.

The immediate issue is whether the tax cuts that originated in the administration of former President George W. Bush should be extended beyond December 31 for all taxpayers including the wealthy, as Republicans want, or just for taxpayers with income under $ 250,000, as Obama and his fellow Democrats want.

Republicans have said they are willing to consider new ways to raise revenue as long as Democrats and Obama agree to accompany it with significant spending cuts. But Boehner said he was “disappointed” with the negotiations and said Geithner had brought no specific proposals to the talks.

“We have no idea what the White House is willing to do. I gotta tell you I’m disappointed in where we are and disappointed in what’s happened over the past couple of weeks,” said Boehner, adding he had a “direct and straightforward” talk with Obama on Wednesday night.

The Geithner meeting with House Republicans also was set to include Majority Leader Eric Cantor of Virginia, Budget Committee Chairman Paul Ryan of Wisconsin – fresh off his Republican vice-presidential campaign – and the chairman of the House’s tax writing Ways and Means Committee, Dave Camp of Michigan.

Despite a few cracks in Republican ranks, most notably from Republican Representative Tom Cole of Oklahoma, neither side has budged significantly from its position, leaving the markets and political analysts alike to grasp at wording nuances.

“I think unfortunately it seems pretty clear that the market is trading very much off the reading of the tea leaves on how these fiscal cliff negotiations are going,” said Eric Kuby, chief investment officer at North Star Investment Management Corp in Chicago. “I think we’re hostage to this for the rest of the year.”

The post-election lame-duck session of Congress has made clear that until the two sides get over the immediate tax issue, they will not be able to move forward on the serious discussions they desire on longer-term deficit reduction and tax reform.

Keeping the nation in suspense down to a white-knuckled deadline has become the rule rather than the exception for Congress in recent years.

Whether the risk has been a government shutdown or, as in the events that led to the fiscal cliff, default for failure to raise the U.S. government’s borrowing power, Republicans and Democrats have needed the pressure of time and possible disaster to bring them together.