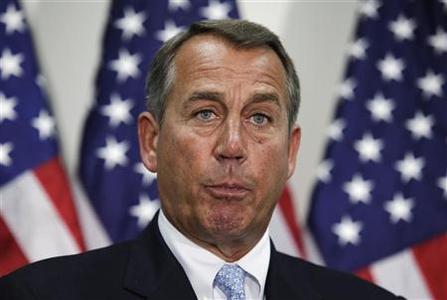 By Thomas Ferraro and Mark Felsenthal

(Reuters) – Republicans and Democrats dug in on “fiscal cliff” talks on Wednesday, with both sides urging quick action but offering no compromises in a political stare-down that shows no signs of breaking.

Less than a month before the onset of spending cuts and tax increases that start to take effect in January unless Congress acts, Republican leaders in the House of Representatives called on President Barack Obama to initiate face-to-face talks and blamed him for a lack of action.

“Where are the discussions? Nothing is going on,” House Majority Leader Eric Cantor told reporters. “We ask the president to sit down with us, be serious about the specifics.” Cantor later said the House would remain in session until “a credible solution to the fiscal cliff” had been announced.

Meeting with a business group on Wednesday, Obama renewed his call to include tax hikes on the wealthiest 2 percent of Americans as part of the final resolution and for including an increase in the nation’s borrowing limit.

No direct talks were scheduled in a confrontation that has become an endless loop of familiar talking points and well-worn positions. Republican leaders have balked at raising any tax rates, and Democrats have resisted Republican calls for cuts in entitlements like the Medicare and Medicaid healthcare programs.

Obama said there could be a quick deal if Republican leaders dropped their opposition to raising tax rates for those making more than $ 250,000 a year in exchange for spending cuts and entitlement reforms.

“If we can get the leadership on the Republican side to take that framework, to acknowledge that reality, then the numbers actually aren’t that far apart,” Obama told executives at a meeting organized by the Business Roundtable, a lobbying group for corporations.

“Another way of putting this is we can probably solve this in about a week. It’s not that tough, but we need that conceptual breakthrough,” he said.

The two sides have submitted proposals to cut deficits by more than $ 4 trillion over the next 10 years, but they differ on how to get there. Republicans propose $ 1 trillion more in spending cuts than Obama, while the president wants $ 800 billion more in tax increases and $ 200 billion to boost the sluggish economy.

Republicans have shown cracks in their solidarity on taxes, however, with some saying they would be willing to let tax rates rise on the wealthiest 2 percent in exchange for extending low rates for the other 98 percent of taxpayers.

“All he (Obama) is talking about is rates on the upper income, so if the House were to give that to him, where does the discussion then go? It goes to entitlements which is where it ought to be in the first place,” Corker said.

With no resolution in sight and the fiscal cliff looming, the White House budget office has directed the Defense Department to begin planning for automatic budget cuts that will take effect in January without a deal, a Pentagon spokesman said.

About $ 500 billion in planned Pentagon spending would be slashed over the next decade unless there is a deal.

Economists have predicted that failure to reach an accord could trigger another recession, and investors in the financial markets have watched the back and forth anxiously. They were encouraged by Obama’s reference to finishing a deal within a week of reaching agreement on taxes.

“Just the idea that we could have some kind of timeline is enough to eliminate some of the concerns. The fiscal cliff is the headline driver, so anything even slightly positive will move markets,” said Todd Schoenberger, managing partner at LandColt Capital in New York.

Senator Tom Coburn, an Oklahoma Republican, said the focus on the end-of-year fiscal cliff was ignoring the long-term threat posed by U.S. debt. He said the path to prosperity would require at least a $ 9 trillion package of spending cuts and tax increases over 10 years, rather than the $ 4 trillion being discussed now.

“Personally I know we have to raise revenue. I don’t really care which way we do it. Actually, I would rather see the rates go up than do it the other way because it gives us a greater chance to reform the tax code and broaden the base in the future,” Coburn said on MSNBC.

Democratic Senator Claire McCaskill of Missouri sounded an optimistic note and said a final deal would include reform of entitlements like Medicare.

“I do think that if there’s not a deal by the end of the year, there will be a deal the first week in January. And the markets need to be aware that this is not going to be, you know, some kind of complete meltdown. We will get a deal,” she told MSNBC.

Corker said Obama’s push to include an increase in the debt ceiling in any final package would complicate the negotiations.

“The real line in the sand is going to be the debt ceiling,” Corker said.