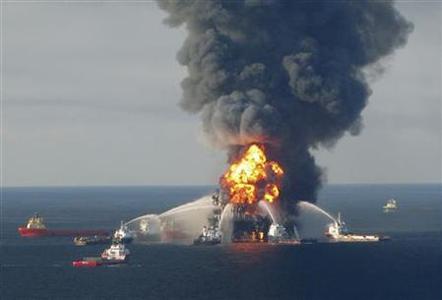 By Chris Baltimore and David Ingram

(Reuters) – BP Plc will pay $ 4.5 billion in penalties and plead guilty to felony misconduct in the Deepwater Horizon disaster, which caused the worst U.S. offshore oil spill ever.

The settlement includes a $ 1.256 billion criminal fine, the largest such levy in U.S. history, the oil company said on Thursday. U.S. Attorney General Eric Holder called the deal a “critical step forward” but was adamant that it did not end the government’s criminal investigation of the spill.

The government also indicted the two highest-ranking BP supervisors aboard the Deepwater Horizon during the disaster, charging them with 23 criminal counts including manslaughter.

The April 2010 explosion on the rig in the Gulf of Mexico killed 11 workers. The mile-deep Macondo oil well then spewed 4.9 million barrels of oil into the Gulf over 87 days, fouling shorelines from Texas to Florida and eclipsing in severity the 1989 Exxon Valdez spill in Alaska.

The company said it would plead guilty to 11 felony counts related to the workers’ deaths, a felony related to obstruction of Congress and two misdemeanors. It also faces five years’ probation and the imposition of two monitors who will oversee its process safety and ethics for the next four years.

Wall Street analysts said the deal will allow BP to focus again on oil production, while one U.S. senator from Louisiana said he hoped the settlement would not prevent his state and others from collecting civil penalties.

U.S.-listed BP shares gained about 0.3 percent on Thursday while its London-traded shares were flat.

BP, which replaced its chief executive after the spill as its market value plummeted, still faces economic and environmental damage claims sought by four Gulf Coast states and other private plaintiffs.

“It certainly is an encouraging step,” said Pavel Molchanov, oil company analyst with Raymond James. “By eliminating the overhang of the criminal litigation, it is another step in clearing up BP’s legal framework as it relates to Macondo.”

The disaster has dragged BP from second to a distant fourth in the ranking of top Western oil companies by value.

The settlement could also prompt a debate in Congress about how funds would be shared with the Gulf Coast states. Congress passed a law last year that would earmark 80 percent of BP penalties paid under the Clean Water Act to Louisiana, Mississippi, Alabama, Florida and Texas.

“With these unprecedented criminal penalties assessed, I urge the Obama administration to be equally aggressive in securing civil monies that can help save our Louisiana coast” through other avenues, Louisiana Senator David Vitter said in a statement. “I certainly hope they didn’t trade any of those monies away just to nail this criminal scalp to the wall.”

Larry Schweiger, president of the National Wildlife Federation, called the settlement a “good down payment” on what BP should ultimately pay, which the environmental group argues is tens of billions of dollars more.

BP said the payments would be spread over six years, adding it expected to be able to handle the payments “within BP’s current financial framework”.

The company has sold $ 35 billion worth of assets to fund the costs of the spill. Matching that, it has paid $ 23 billion already in clean-up costs and claims, and has a further $ 12 billion earmarked for payment in its spill trust fund.

The oil company said it has not been advised of any government authority that intends to debar BP from federal contracting activities as a result of the deal.

BP’s settlement does not resolve civil litigation brought by the U.S. government and U.S. Gulf Coast states, which could be considered when the case convenes in February 2013.

Alabama Attorney General Luther Strange, who represents other spill-hit states in the case, said he intends to prove that BP’s actions were grossly negligent – a charge that would bring billions of dollars in extra liability if upheld.

Holder said at a news conference to discuss the criminal settlement that while the government and BP had held talks to resolve the civil claims, the sides had not been able to agree on a “satisfactory” number. He said a deal was still possible but the government was moving ahead to the February trial.

Negligence is a key issue. A gross negligence finding could nearly quadruple civil damages owed by BP under the Clean Water Act to $ 21 billion in a straight-line calculation.

Chief Financial Officer Brian Gilvary said the company’s provisions should be enough to cover liabilities, provided it avoids a conviction for gross negligence, and that it had shareholder support to fight the case should that happen.

“I can boldly defend where we are in the provisions today. If something were to happen in the trial that read across to gross negligence … then we would certainly take that to appeal,” he said on a conference call with analysts.

Still unresolved is potential liability faced by Swiss-based Transocean Ltd, owner of the Deepwater Horizon vessel, and Halliburton Co, which provided cementing work on the well that U.S. investigators say was flawed.

Halliburton said it “remains confident that all the work it performed with respect to the Macondo well was completed in accordance with BP’s specifications for its well construction plan and instructions. Halliburton has cooperated with the DOJ’s investigation.” Transocean was not available to comment.

According to the Justice Department, errors made by BP and Transocean in deciphering a pressure test of the Macondo well are a clear indication of gross negligence.

Transocean disclosed in September that it is in discussions with the Justice Department to pay $ 1.5 billion to resolve civil and criminal claims.

BP has already announced an uncapped class-action settlement with private plaintiffs that the company estimates will cost $ 7.8 billion to resolve litigation brought by over 100,000 individuals and businesses claiming economic and medical damages from the spill.