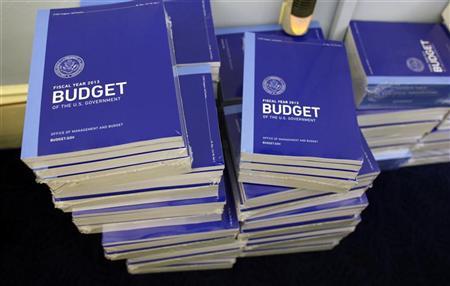 Copies of U.S. President Barack Obama’s Fiscal Year 2013 budget are seen stacked inside the House Budget Committee room on Capitol Hill in Washington February 13, 2012. Obama will propose an election-year budget on Monday that raises taxes on millionaires and seeks billions of dollars for job-creating infrastructure projects, drawing a populist battle line with his Republican opponents.

The Treasury said on Tuesday the October deficit was $ 120 billion, larger than economist forecasts for a $ 114 billion gap and up from $ 98 billion in October of 2011.

Growth in expenditures outpaced rising receipts, deepening the deficit. Outlays grew to $ 304 billion from around $ 262 billion in the same month last year while receipts rose to $ 184 billion from $ 163 billion.

Following President Barack Obama’s election to a second term last week, the debate in Washington has quickly shifted to the combination of expiring tax breaks and new spending reductions known as the “fiscal cliff.”

Lawmakers involved in the debate gathered in Washington on Tuesday for the first time since the elections, setting the stage for a week of trial balloons and rhetorical repositioning.

The Congress has just returned from a break after the November 6 elections. Topping the agenda is the year-end convergence of urgent tax and spending issues that, if mishandled, could plunge the economy into another recession.

The United States had reported a budget surplus for September, the final month of the 2012 fiscal year, but the tiny bump in revenues did not prevent the country’s deficit from exceeding $ 1 trillion for the fourth year in a row.

The 2012 budget gap was $ 1.089 trillion, smaller than last year’s deficit of $ 1.297 trillion largely because of higher corporate income tax receipts and less spending.