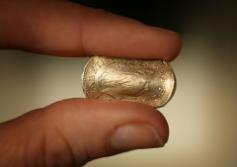 Lots of quarterly reports are on deck this week, to go along with all the delayed economic data expected to be released. Analysts and investors should have plenty to mull over.

Earnings highlights will include reports from AT&T, McDonald’s, Microsoft and Netflix, which are all expected to post year-over-year earnings growth. Analysts are looking for an earnings decline from Ford and a net loss from Amazon.com.

Below is a quick day-by-day run down of analyst expectations for some of the week’s most prominent reports.

The fast-food giant is expected to say that earnings per share (EPS) grew more than five percent year-over-year to $ 1.51, while revenue rose less than three percent to $ 7.34 billion. The forecast for Netflix has EPS more than 73 percent higher to $ 0.49 on revenue that is up more than 21 percent to $ 1.1 billion.

See also: McDonald’s Earnings Preview: Was The Menu Tinkering Worth It?

EPS from Discover Financial Services (NYSE: DFS) are expected to be the same as a year ago, while an earnings decline is predicted from Gannett (NYSE GCI).

Delta Air Lines (NYSE: DAL) is scheduled to share its third-quarter results Tuesday before the opening bell. The forecast has EPS up almost 34 percent year-over-year to $ 1.36 on revenue that is more than five percent higher to $ 10.47 billion.

Thursday will be the busiest day of the week for earnings, and the early morning report from Ford Motor (NYSE: F) will be one of the highlights. The automaker is expected to say that EPS fell more than seven percent from a year ago to $ 0.37, but that revenues grew about 13 percent to $ 34.21 billion.

The day’s other highlights include the end-of-the-day reports from Amazon.com (NASDAQ: AMZN) and Microsoft (NASDAQ: MSFT). The consensus forecasts call for a net loss of $ 0.09 from the former and EPS of $ 0.54 (up marginally) from the latter. Amazon’s revenues are expected to be up more than 21 percent to $ 16.77 billion, while those from Microsoft are about 11 percent higher to $ 17.78 billion.

Procter & Gamble (NYSE: PG) and United Parcel Service (UPS) step into the earnings spotlight Friday morning. They are forecast to have EPS of $ 1.05 and $ 1.15, respectively. That would be down marginally for the former and up almost eight percent for the latter, relative to a year ago.

Revenues for the consumer products giant are expected to be marginally higher to $ 21.06 billion. For the package delivery company, revenues are predicted to come in at $ 13.60 billion, or up about four percent year-over-year.