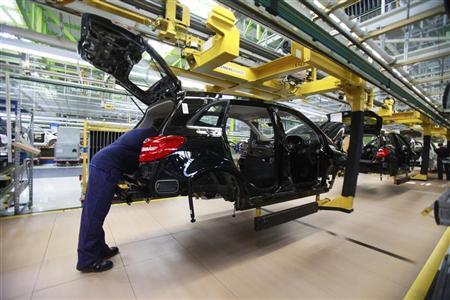 An employee of German car manufacturer Mercedes Benz works on a Mercedes B-class car at the Mercedes plant in Rastatt July 16, 2012.

(Reuters) – The euro zone economy is on course for its weakest quarter since the dark days of early 2009, according to business surveys that showed companies toiling against shrinking order books in November.

Service sector firms like banks and hotels that comprise the bulk of the economy fared particularly badly this month, and laid off staff at a faster pace.

The flash service sector PMI fell to 45.7 this month, its lowest reading since July 2009, the survey showed on Thursday, failing to meet the expectations of economists who thought it would hold at October’s 46.0.

It has been rooted below the 50 mark that divides growth and contraction for 10 months now, and survey compiler Markit said it was too soon to say if this marked the nadir.

With more austerity on the way, and a reminder of the festering sovereign debt crisis in this week’s failure of lenders to agree more aid for Greece, prospects for next year look ominous.

“The concern about the outlook is getting worse as we move towards the end of the year,” said Chris Williamson, chief economist from Markit.

He added that German companies especially have become more pessimistic about the year ahead.

“If the domestic economy of Germany, the largest euro zone nation, is weakening, then that bodes ill for the rest of the region, especially as there’s little trade picking up outside the region.”

Overall, the PMIs were consistent with the economy shrinking around 0.5 percent in this quarter, Markit said.

That would be the sharpest contraction since the first quarter of 2009.

While they also suggested the economy shrank by a similar amount in the third quarter, instead of 0.1 percent shown in last week’s official data, Williamson said it was very likely the fourth quarter would see a larger downturn.

“The factors that were helping to prop up the official data in the third quarter won’t be apparent in the final quarter of the year. So you are going to see a deterioration in those official numbers.”

Economists pointed to stronger industrial production data early in July and August as a reason why the euro zone economy did not contract as badly as many feared in the third quarter.

There was little conviction among businesses that things will get better soon.

Service sector companies are now more pessimistic about the year ahead than at any time since March 2009, when the expectations index last plumbed 48.6 and the region was in the midst of its worst post-war recession.

The manufacturing PMI edged up to 46.2, its best showing since March, from 45.4 in October. That was better than even the most optimistic forecast for 46.0, from 40 economists polled by Reuters.

The composite PMI, which groups together the services and manufacturing survey, pointed to an almost unchanged rate of decline for the economy in November, rising to 45.8 from 45.7 in October.

It also showed inflation pressures are easing quickly for companies, as both output and input prices indexes dropped.

Economists polled by Reuters remain divided over whether the European Central Bank will cut its main refinancing rate from 0.75 percent to a new record low 0.5 percent.

“I think the ECB consider their policy to be suitably accommodative at the moment and will continue to put the ball in the court of national governments to work on structural issues,” said Williamson.

Detailed PMI data are only available under license from Markit and customers need to apply to Markit for a license. To subscribe to the full data, click on the link below: http://www/markit.com/information/register/reuters-pmi-subscriptions For further information, please phone Markit on +44 20 7260 2454 or email economics@markit.com