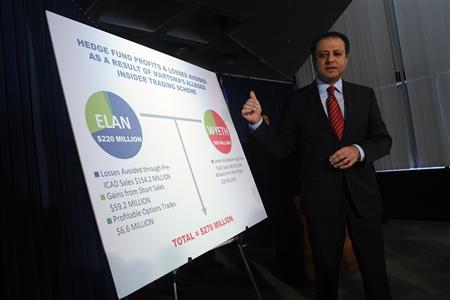 By Emily Flitter and Basil Katz

(Reuters) – A former hedge fund manager who worked for a fund affiliated with Steven A. Cohen’s SAC Capital was arrested on Tuesday in what U.S. prosecutors are calling “the most lucrative insider-trading scheme ever.”

Mathew Martoma, who worked for CR Intrinsic Investors in Stamford, a unit of SAC Capital, has been accused of making more than $ 276 million in illicit profits based on tips about Elan Corp and Wyeth LLC, which was bought by Pfizer in late 2009.

Authorities contend Martoma and SAC Capital’s CR Intrinsic made more than $ 276 million in illegal profits or avoided losses in July 2008 by trading ahead of a negative public announcement involving the clinical trial results for an Alzheimer’s drug being jointly developed by Elan and Wyeth.

The charges against Martoma, who left the SAC Capital division in 2010, stem from the federal government’s long-running investigation into improper trading in the $ 2 trillion hedge fund industry.

To date, the investigation has led to more than 50 convictions with the most notable ones being former Galleon founder Raj Rajaratnam and former Goldman Sachs Group director Rajat Gupta.

Slowly, U.S. authorities have been filing charges and winning convictions against lower-level traders and analysts who once worked for Cohen, one of the hedge fund industry’s most successful and best-known traders.

Martoma’s lawyer, Charles Stillman, said his client was an “exceptional portfolio manager” and he is confident that Martoma will be exonerated.

A spokesman for SAC Capital and Cohen, who was not charged, said he was not immediately prepared to comment.

The criminal complaint filed by federal prosecutors and a related civil lawsuit filed by the U.S. Securities and Exchange Commission contend Martoma got insider information from a doctor, who once worked as a consultant for a so-called expert network. Hedge firms use such networks to gain insight into various industries.

According to court papers filed on Tuesday, Martoma spoke in July 2008 to the “hedge fund owner” and recommended selling shares of Elan and Wyeth before drug trial results were announced.

The court filings do not identify the hedge fund owner, but CR Intrinsic is part of SAC Capital, which is a $ 14 billion hedge fund controlled by Cohen.

The court papers do not indicate that Cohen had any knowledge of how Martoma obtained the information. They do indicate that the doctor is serving as a confidential cooperating witness in the case.

The charges against Martoma are the latest in a string of insider trading allegations to be leveled against former top traders and analysts who worked at the Stamford, Connecticut-based SAC Capital.

A person familiar with SAC Capital said that Martoma, an alumnus of the Stanford Graduate School of Business in California, sat near Cohen at SAC Capital’s large trading floor in Stamford, Connecticut.

Martoma is the fifth former SAC Capital employee to be accused of insider trading in the last few years.

The SEC complaint identified the doctor who provided inside information to Martoma as Dr. Sidney Gilman, an 80-year-old Michigan resident, who also served as a consultant for Elan and Wyeth. Prosecutors did not disclose Gilman’s name, but said the doctor is cooperating with the investigation.

Martoma was arrested on Tuesday morning in Boca Raton, Florida, according to an Federal Bureau of Investigation spokesman.