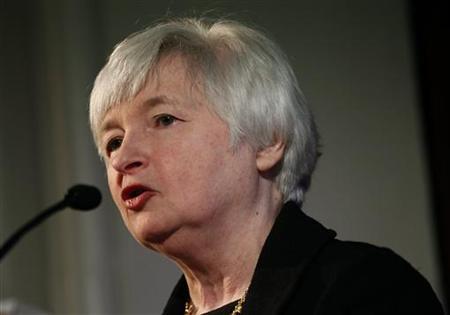 Janet Yellen, vice chair of the Board of Governors of the U.S. Federal Reserve System, speaks at the University of California Berkeley Haas School of Business in Berkeley, California November 13, 2012.

The central bank’s No. 2 official, viewed as a front-runner to succeed Fed Chairman Ben Bernanke when his term expires in January 2014, also said she strongly backed adopting inflation and unemployment thresholds to guide future policy.

That would allow the Fed to move away from shaping financial market expectations with calendar dates. After its last meeting in October, the Fed reiterated that it expected to keep the overnight federal funds rate near zero until at least mid-2015.

Yellen, however, argued an optimal policy would keep rates on hold for longer at the cost of a bit more inflation.

“This highly accommodative policy path generates a faster reduction in unemployment than in the baseline, while inflation overshoots the (Fed policy) committee’s 2.0 percent objective for several years,” she told students at the Haas School of Business at the University of California, Berkeley.

As a baseline, Yellen used an early September consensus from Wall Street firms, which showed they expected rates to remain near zero only through the first half of 2015.

Yellen is seen as one of the more dovish members of the Fed’s policy-setting committee in her willingness to support aggressive efforts to spur job growth, but some other members are more hawkish in their concerns about inflation.

Dallas Federal Reserve Bank President Richard Fisher, asked about the 2016 date, said there was a limit to how much more monetary policy could do to spur growth.

“There is a limit. We’ll have to discuss as a committee what that limit is … we just cannot continue down the road of infinite expansion of monetary policy,” he told CNBC television.

But Fisher, who is not a voter this year, also said that inflation and inflation expectations remained under control, and urged U.S. lawmakers to tackle a year-end fiscal cliff of potential tax hikes and spending cuts to remove uncertainty that he saw holding back business hiring.

The Fed cut overnight rates to near zero in December 2008 and it has bought around $ 2.3 trillion in securities to drive other borrowing costs down and spur a stronger recovery.

While there are signs the economy is gaining a bit of speed, the jobless rate remains stubbornly high at 7.9 percent.

In January, the Fed adopted what it termed a “balanced approach” to its mandated goals of full employment and stable prices, suggesting it would temporarily tolerate a bit more inflation to move the jobless rate lower.

On prices, it normally targets 2.0 percent inflation and policymakers’ current estimates suggest they view an unemployment rate of between 5.2 percent and 6.0 percent as consistent with maximum employment.

Yellen made clear that she does not view the inflation target as a ceiling and that slightly higher inflation may well be needed for the Fed to fulfill its promise to pursue a “balanced” monetary policy.

“The optimal policy to implement this ‘balanced approach’ to minimize deviations from the inflation and unemployment goals involves keeping the federal funds rate close to zero until early 2016,” she said. She said rates would stay below the path expected by Wall Street dealers through 2018.

Yellen stressed that communicating Fed intentions clearly was vital to the success of its policies, and emphatically endorsed adopting numerical thresholds for unemployment and inflation to guide expectations on when rates would go back up.

“Several of my … colleagues have advocated such an approach and I am also strongly supportive,” she said.

“The idea is to define a zone of combinations of the unemployment rate and inflation within which the (Fed) would continue to hold the federal funds rate in its current, near-zero range,” Yellen said.

She said that would help shape expectations of the Fed’s likely response to incoming data. Even so, she said the thresholds would not trigger a rate hike decision, which would require “further committee deliberation and judgment.”