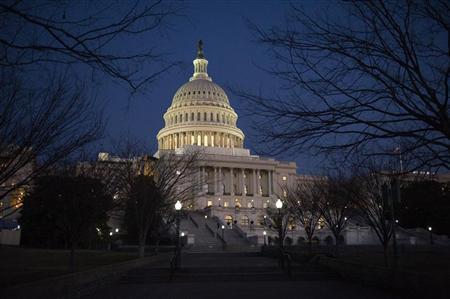 Darkness sets in over the U.S. Capitol building hours before U.S. President Barack Obama is set to deliver his State of the Union address to a joint session of Congress on Capitol Hill in Washington January 24, 2012.

By Thomas Ferraro and Jeff Mason

(Reuters) – The Congress advanced by inches on Tuesday toward compromise on taxes and spending, but a firm deal to avert the “fiscal cliff” at the end of the year still seemed miles away, despite growing pressure from business interests for action.

President Barack Obama was set to hold meetings with business leaders on Tuesday and Wednesday and then travel to a factory in Pennsylvania on Friday to press his case on taxes.

Fresh from his November 6 re-election, Obama wants to extend low income tax rates for middle-class Americans, but let tax rates rise on income over $ 250,000 a year per family.

Without action by Congress, the Bush tax cuts will expire at year-end and rates will go up for most taxpayers.

The tax rate dispute is the central obstacle to an agreement that would prevent the nation from plunging off the fiscal cliff, a convergence of an estimated $ 600 billion in tax increases and spending cuts that threatens to trigger another recession.

“There remains no clarity on the ultimate status on the Bush tax cuts, which have to be resolved before you can move forward with the remainder of the fiscal cliff,” said Chris Krueger, an analyst at Guggenheim Securities’ Washington Research Group.

The debate in Congress raged on as the government reported another increase in planned U.S. business spending in October, while U.S. stock prices were broadly flat on Wall Street. The Dow Jones industrial average was at about 12,950, up 15 percent from a year ago despite market worries about fiscal policy.

Republicans have not shifted from their stance against any tax rate increases, but a few have been publicly disavowing a no-new-taxes pledge to which most of them have adhered for years, putting tax revenues, if not higher rates, on the negotiating table.

“For years, Norquist has bullied lawmakers … So I was pleased to see a few Republicans in Congress distance themselves from Norquist this week,” Reid said on the Senate floor.

“Several Republican lawmakers have said revenue should be on the table during fiscal cliff negotiations. Now it’s time for those Republicans to turn happy talk into action.”

Norquist appeared Tuesday on Fox News and said talk of Republicans backing away from his pledge was “a complete media-created frenzy.”

“Progressives should be willing to talk about ways to ensure the long-term viability of Medicare and Medicaid” for the elderly and poor, Durbin said in excerpts from a speech.

But he added that Medicare and Medicaid should not be part of the current negotiations on averting the fiscal cliff. On that front, Durbin stood firmly with Obama, urging extension of middle class tax cuts for 98 percent of Americans.

As part of a multi-pronged push on taxes, Obama will meet with a group of small-business owners on Tuesday. On Wednesday he will host leaders of larger businesses. Then on Friday, he will visit a manufacturing facility of The Rodon Group, a small toy company in Pennsylvania.

Obama’s visit and his meetings at the White House are meant to pressure Republicans to extend tax cuts for middle-income people and end them for wealthier families.

A pressure group called Fix the Debt – which includes budget deficit hawks and corporate leaders – scheduled its own news conference for Wednesday to urge Congress “to enact a plan that would allow us to steer away from the fiscal cliff and further economic instability.”

Senate Republican Leader Mitch McConnell ripped into Obama for planning to hit the road later this week to promote his tax agenda. “Rather than sitting down with lawmakers of both parties and working out an agreement, he’s back out on the campaign trail,” McConnell roared on the Senate floor.

“We already know the president is a very good campaigner. What we don’t know is whether he has the leadership qualities necessary to lead his party to a bipartisan agreement.”