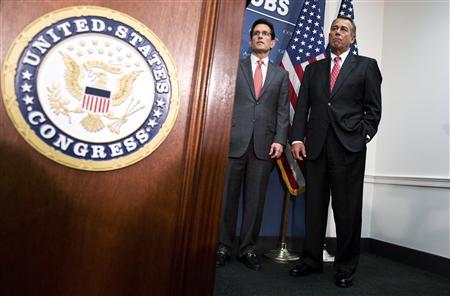 (Reuters) – With time running short before a Dec. 31 deadline, House of Representatives Speaker John Boehner will begin work on legislation that simply would extend current low income tax rates for all families with incomes below $ 1 million a year, according to an aide.

Negotiations will continue with the White House on a broader tax and spending deal, the Boehner aide said.

Boehner is presenting the plan to rank-and-file Republicans in a closed-door session.

On January 1, income tax increases for most Americans will begin unless Congress acts.

Last July, the Democratic-controlled Senate passed a bill to extend the current low rates for all families with net incomes below $ 250,000 a year. The House Republican proposal, if passed by the House, would require agreement by the Senate or force a round of negotiations on a compromise between the two chambers.

In excerpts of remarks Boehner was delivering to his Republican members Tuesday morning, the speaker complained that “the White House just can’t seem to bring itself to agree to a ‘balanced’ approach” to deficit-reduction in negotiations. At the same time, Boehner said Republicans were “leaving the door wide open for something better” than just the limited extension of current low tax rates for most Americans.

“Current law has tax rates going up on everyone January 1. The question for us is real simple: How do we stop as many of those rate hikes as possible?” Boehner said.

For months, Democrats have been urging House Republicans to pass a bill protecting middle-class taxpayers from a January 1 rate increase.