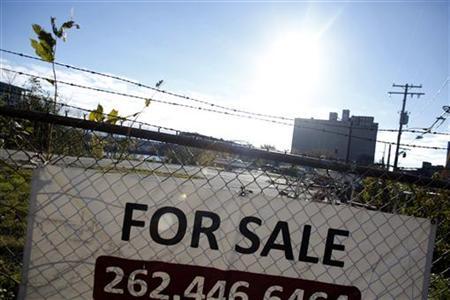 A ”for sale” sign is seen at a boat yard just off the Milwaukee Harbor in Milwaukee November 2, 2012.

(Reuters) – Home resales rose in October and a gauge of homebuilder sentiment climbed to a six-year high in November, signs of surprising vigor in the country’s still-struggling housing market.

Separately, strengthening demand for new homes drove an increase in a monthly measure of home builder sentiment, which hit a more than six-year high in November, topping even the most optimistic forecast in a Reuters poll of analysts.

Rising home prices and a faster pace of sales have shown the housing market has finally turned the corner this year. The market collapsed when a mortgage debt bubble burst in 2006, helping trigger the 2007-09 recession.

The data on Monday suggested the recovery in housing is advancing even faster than many analysts had expected.

“The housing market is continuing to improve. It’s probably improving more than most economists were projecting earlier this year,” said Patrick Newport, an economist at IHS Global Insight in Lexington, Massachusetts.

The reports also support the view that the broader economic recovery is becoming increasingly self-sustaining, with job creation helping drive home sales, which in turn are supporting economic growth. Home building is expected to add to economic growth this year for the first time since 2005.

The housing data also suggested that superstorm Sandy, a mammoth storm that slammed into the U.S. East Coast on October 29, continues to distort economic data in the United States.

The Northeast was the only region in the country where the pace of sales fell. NAR economist Lawrence Yun said Sandy would likely leave a bigger mark in November and December, although he expected the impact would only be temporary.

The storm, which killed more than 130 people in the United States and left millions of homes and businesses without electricity, led U.S. factories to cut production in October. It also weighed on auto sales as consumers stayed away from showrooms.

Economists, however, think Sandy’s impact on the economy will be temporary. Indeed, not all of the impact is negative. Home improvement retailer Lowes reported higher-than-expected profits on Monday as its sales got a lift from people buying items like generators, flashlights and batteries ahead of Sandy.

The housing data showed that home prices continue to rebound. In October, the median price for an existing home was $ 178,600, up 11.1 percent from a year earlier.

Supporting prices, fewer people sold their homes under distressed conditions, which include foreclosures, compared to the same period in 2011. Also, the nation’s inventory of existing homes for sale fell 1.4 percent during the month to 2.14 million, the lowest level since December 2002.

The shrinking supply of distressed and foreclosed inventory helped push U.S. homebuilder sentiment up for a seventh consecutive month in November.

The National Association of Home Builders said its sentiment index rose to 46 — the highest since May 2006 — from 41 the month before. Economists polled by Reuters had predicted the index would remain unchanged.

However, the gauge remained below 50, a reminder that the housing market was still some way off full recovery. Readings below 50 mean more builders view market conditions as poor than favorable. The index has not been above 50 since April 2006.

The measure has made strong progress over the last year, helping to cement optimism in the sector.

“Builders are reporting increasing demand for new homes as inventories of foreclosed and distressed properties begin to shrink in markets across the country,” said NAHB Chairman Barry Rutenberg.