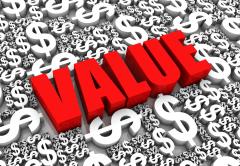 Many investors that are familiar with MSCI (NYSE: MSCI), know the company as one of the dominant provider of benchmark indexes for exchange-traded products. As of the end of September, $ 366 billion in ETP assets were linked to MSCI indexes.

That is good for 28 percent of the U.S. ETP market and puts MSCI behind only Standard & Poor’s Dow Jones. ETPs that track S&P Dow Jones indexes had a combined $ 446 billion in AUM, or 35 percent market share, at the end of September, according to iShares.

In other words, MSCI is a recognizable brand, but some investors may not be familiar with the shares of the company. For those not in the know, MSCI experienced its worst one-day decline as a publicly traded company in early October when Vanguard announced it would drop MSCI indexes being used on 22 of its ETFs. Pennsylvania-based Vanguard is the third-largest U.S. ETF provider.

That announcement, arguably the biggest news in the ETF business this year, was unveiled on October and sent shares of MSCI plunging by 27 percent. While shares of the index provider have started to perk up a bit in recent days, the stock has come nowhere close to wiping out those early October losses.

MSCI’s recent price action could beg the question “Is there value to be had?” The prudent way of answering that query is “Maybe, maybe not.” However, there is no denying the post-Vanguard news sell-off appears to be greatly overdone.

MSCI’s annualized revenue and operating income associated with the Vanguard funds being transitioned are approximately $ 24 million, according to a statement issued by the firm on October 2. The impact of the lost Vanguard business for MSCI will be felt in the first quarter of 2013 as Vanguard begins transitioning away from MSCI indexes.

Still, $ 24 million in annualized revenue and operating income is not a large amount for a company that had $ 703.1 million in operating revenue for the first nine months of this year and net income of nearly $ 130 million for the same period.

With the Vanguard news out in the open and over and done with, the issue keeping a lid on shares of MSCI is the firm’s relationship with BlackRock (NYSE: BLK). BlackRock is the parent company of iShares, the world’s largest ETF sponsor. With the loss of Vanguard, some analysts view iShares as the only game in town for MSCI. Indeed, all one needs to do is peruse the list of the 280 ETFs offered by iShares in the U.S. to see MSCI enjoys an important relationship with BlackRock.

The logic here is that BlackRock knows it accounted for eight percent of MSCI’s 2011 revenue and that it will press for licensing fee reductions the next time those agreements between the two firms come up for renewal.

To be sure, BlackRock does hold an important card. The company has filed plans with the Securities and Exchange Commission to use its own indexes for some of its ETFs. While the company has made no movement on that front since the filing, it is worth noting more ETF issuers are moving toward self-indexing.

There is a bull case for MSCI. BlackRock is by no means the firm’s only customer. The company says it has 6,000 global clients and in “the first nine months of 2012, ETF providers around the world have launched a total of 57 new ETFs linked to MSCI indices, including all of MSCI’s flagship indices.”

Logically, the ETF industry’s growth trajectory adds to the potential upside for MSCI. Depending on which estimates investors believe are accurate, ETF assets under management are expected to double or triple over the next several years. ETF providers that are looking to either bolster their presences in the market or pilfer market share from larger rivals can only afford to be so adventurous with new offerings.

That is to say, brand recognition of MSCI is valuable for ETF sponsors. Investors know MSCI, but they may not be as familiar with some of the more obscure index providers out there. In this case, familiarity breeds confidence among investors and that confidence could lead to more inflows to ETFs linked to MSCI indexes than other funds.

Next there is no getting around the fact that investors love emerging markets and global ETFs. Even when excluding the Vanguard MSCI Emerging Markets ETF (NYSE: VWO) from the conversation because that fund will cease using the MSCI Emerging Markets Index next year, MSCI is the dominant index provider to eight of the nine largest country-specific ETFs on the market today. The firm is the index provider to the two largest multi-country ETFs after VWO as well.

Still, there are risks to holding MSCI over an extended time horizon, say multiple years. Currently, the company does not pay a dividend, meaning investors will be entirely dependent on capital appreciation. For now, the shares are best used as swing trade/rebound play. Long-term investors that need mid-cap exposure should wait for the market to really get over the Vanguard news, something that has yet to happen.