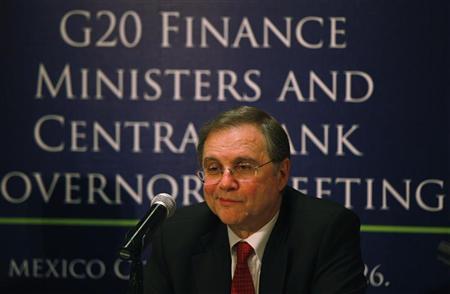 While a deep recession and political uncertainty will weigh on the country in coming months, the central banker said he believes Italy has overcome the worst phase of the debt crisis.

The ECB’s Outright Monetary Transactions (OMT), or bond-buying scheme, is a tool created to face deep financial difficulties, said Visco in the interview.

“Italy suffered from such deep problems at the end of last year but it reacted and was able not only to maintain market access, but also to reduce tensions,” Visco said.

Rome’s 10-year borrowing costs soared to a euro lifetime high of nearly 8 percent in November 2011. At that time the country was under strong pressure to ask for international aid, but a new technocrat government headed by Mario Monti was able to reassure markets through an austerity program.

Italian government reforms and the build up of effective euro zone financial backstops – the European Stability Mechanism and the ECB’s OMT – helped Rome reduce market pressure to bearable levels, according to the central banker.

“Now the situation is characterized by lower tension, while the (ECB’s bond-buying scheme) was created to face really acute situations in which borrowing costs are pushed well above what is justified by a country’s economic fundamentals,” Visco said.