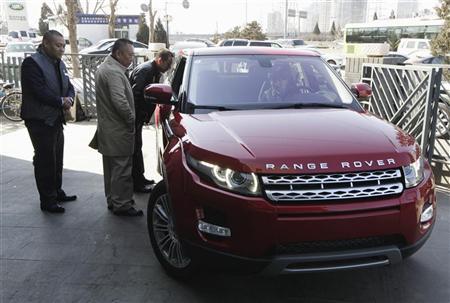 Customers look at a Range Rover Evoque car outside a dealership in Beijing February 17, 2012.

The General Administration of Quality Supervision, Inspection and Quarantine said in a statement on its website that Jaguar Land Rover’s China unit is recalling 190 2012 Evoque and Freelander vehicles produced on June 11 this year.

The agency’s statement said the recall was prompted by concerns that substandard fixings in the vehicles’ rear brake calipers may lead to brakes failing and sudden tire deflation.

The agency said another 147 2012 Evoque and 2013 Evoque vehicles made between October 20 and September 18 will also be recalled due to problems in their steering boxes, which contain “security risks”.

Jaguar Land Rover, the British luxury marque owned by India’s Tata Motors (TAMO.NS), has relied on strong demand over the past year from emerging markets such as China for its luxury SUVs and sleek sedans to offset sluggish growth in developed markets.