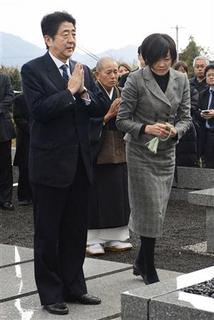 Japan’s incoming Prime Minister and the leader of Liberal Democratic Party (LDP) Shinzo Abe and his wife Akie pay respects to a grave of his father and former Foreign Minister Shintaro Abe in Nagato, in this photo taken by Kyodo December 22, 2012.

(Reuters) – Japan’s next premier, Shinzo Abe, renewed pressure on the central bank to adopt a 2 percent inflation target, saying that he will try to revise a law guaranteeing its independence if his demand is not met.

He also said he will pick someone who agrees with his views on the need for bolder monetary easing to succeed BOJ Governor Masaaki Shirakawa when his term expires in April next year.

“At this month’s policy meeting, the BOJ said it would examine (setting an inflation target) at its next meeting” in January, Abe said on television on Sunday.

“If it doesn’t, we’ll revise the BOJ Law and set up a policy accord with the central bank to agree on an inflation target. We may also seek to have the BOJ held accountable for job growth.”

The comments are the strongest warning to date on the possibility of revising the law guaranteeing the BOJ’s independence from political interference. It is rare for a prime minister or a would-be premier to make explicit demands on what the BOJ should do at its policy-setting meetings.

Abe, who is set to become prime minister on Wednesday after his opposition Liberal Democratic Party (LDP) won this month’s lower house election, has put the BOJ at the center of political debate, urging bolder monetary stimulus to beat deflation.

He wants the BOJ to share with the government a binding 2 percent inflation target, double the central bank’s current goal, and ease policy “unlimitedly” to achieve it. There is no specific time frame.

Under pressure, the central bank loosened policy on Thursday for the third time in four months by boosting asset purchases. It also said it would consider setting a higher inflation target at its next policy-setting meeting on January 21-22.

Some central bank policymakers, notably the conservative Shirakawa, have been reluctant to set a 2 percent inflation target in a country which has been mired in grinding deflation for more than a decade.

But they may have little choice but to meet Abe’s demand given explicit threats to the BOJ’s independence.

Abe’s LDP and coalition partner hold a two-thirds majority in the powerful lower house that allows them to overrule bills turned down in the upper house – including one to revise the BOJ Law.

“Countries around the world are printing more money to boost their export competitiveness. Japan must do so too” to keep the yen from rising, Abe said. “It makes a big difference whether the yen is at 80 to the dollar, or at 90 to the dollar.”

Abe’s new government will have the power to nominate a new BOJ governor when Shirakawa’s term ends in April next year. The nomination, unlike other legislation, needs approval by both houses of parliament.

That means Abe needs support from other parties to pass through the nomination in the upper house, where his coalition doesn’t hold a majority.

“I’d like to have someone who agrees with our view (on monetary policy),” Abe said on Shirakawa’s successor. “There are parties that share my view” which should be willing to cooperate with the LDP in passing the nomination through the upper house, he said.