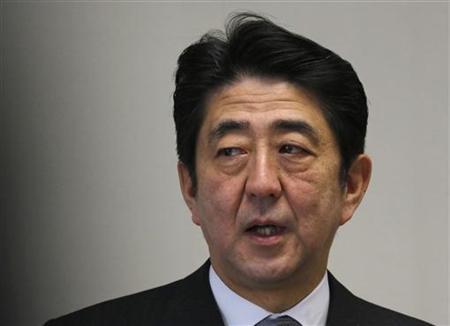 Shinzo Abe, Japan’s incoming prime minister and the leader of Liberal Democratic Party (LDP), speaks during a meeting at the LDP headquarters in Tokyo December 20, 2012.

By Tetsushi Kajimoto and Stanley White

(Reuters) – Incoming Japanese Prime Minister Shinzo Abe kept up his calls on Tuesday for the Bank of Japan to drastically ease monetary policy by setting an inflation target of 2 percent, and repeated that he wants to tame the strong yen to help revive the economy.

Abe, a security hardliner who will be sworn in as premier on Wednesday, when he is also expected to appoint his cabinet, is prescribing a mix of aggressive monetary policy easing and big fiscal spending to beat deflation and rein in the strong yen.

“The economy, diplomacy, education and rebuilding in the northeast (hit by the 2011 tsunami, quake and nuclear disaster) are in a critical situation. I want to create a cabinet which can overcome this crisis,” Abe told a news conference.

“We have advocated beating deflation, correcting the strong yen and achieving economic growth during the election, so we must restore a strong economy,” he said, adding that the stagnant economy was also undermining Japan’s diplomatic clout.

Abe – who quit abruptly as prime minister in 2007 after a troubled year in office – repeated that his new government hopes to sign an accord with the BOJ to aim for 2 percent inflation, double the central bank’s current target.

“Once I become prime minister, I will leave it up to the BOJ to decide on specific measures on monetary policy,” Abe told a meeting with officials from major business lobby, Keidanren.

“I hope the BOJ pursues unconventional measures, including bold monetary easing,” he added, maintaining pressure on the central bank to expand monetary stimulus more forcefully in order to tackle the deflation that has dogged Japan for more than a decade.

The party has threatened to revise a law guaranteeing the BOJ’s independence unless the central bank sets a 2 percent inflation target. The BOJ, which eased monetary policy in December, has promised to debate setting a new price target at its next policy-setting meeting on January 21-22.

A source close to Abe said that revising the BOJ law was unlikely to be necessary since the central bank would probably give in to Abe’s pressure to adopt the 2 percent target.

“I don’t think it will go so far as revising the BOJ law,” the source said. “The BOJ has compromised quite a bit … and I think it will adopt a 2 percent inflation target. In that case, it will not be necessary to revise the BOJ law.”

Abe and his coalition partner, the head of the small New Komeito party, agreed on Tuesday to set the inflation target and compile a big stimulus budget, New Komeito leader Natsuo Yamaguchi told reporters after the two met.

Abe is expected to draft an extra budget by mid-January with markets looking for 10 trillion yen ($ 117.93 billion) in new spending, part of which would need to be covered by additional borrowing.

Critics have suggested that the LDP, which ruled Japan almost non-stop for more than 50 years until it suffered a huge election defeat in 2009, was returning to the wasteful spending that characterized much of its past reign.

The source close to Abe said, however, that public works spending in that budget was unlikely to exceed 5 trillion yen.

“The extra budget will be presented to parliament towards the end of January. We cannot find 10 trillion yen worth of public works projects by then,” the source told Reuters, adding that the 10 trillion yen total figure was not set in stone.

“The scale will be 10 trillion yen but it will not be limited to public works spending. The most we could manage on public works would be 5 trillion.” The remainder could include such steps as tax breaks for purchases of fuel-efficient cars, and government funding for basic pension payouts, he added.

Also on Tuesday, Abe unveiled a new party line-up that includes women in key posts in an effort to show that the long-dominant party was turning over a new leaf.

Seiko Noda, 52, a former consumer affairs minister who went public with her struggle to have a child and gave birth at the age of 50 through artificial insemination, was appointed head of the party’s general council. Sanae Takaichi, 51, who served as minister for gender equality in Abe’s first 2006-2007 cabinet, was appointed LDP policy chief.

The cabinet looks set to include a heavy dose of Abe’s close allies who share his views on the economy and his tough security stance.

As Abe put finishing touches to his cabinet, the defeated Democratic Party of Japan elected former Trade Minister Banri Kaeda as its leader to replace outgoing Prime Minister Yoshihiko Noda, who quit to take responsibility for the election debacle.