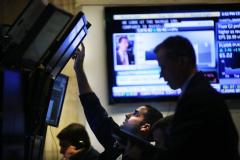 Last Wednesday, the Federal Reserve is expected to announce reduction of its $ 85 billion bond buying program, confrontation with Syria is still a possibility, and the government is expected to run out of money next month.

The Nasdaq had been outperforming the Dow and S&P for the past two months, but is now showing signs of as Apple (NASDAQ: AAPL), which seems to make up half the index, is tumbling.

Equities Closed UP
McEwen Mining (NYSE: MUX) gained 11.35 percent to $ 2.55 on Monday’s session following some leadership changes announced on Friday after the close.

Shares of Avanir Pharmaceuticals (NASDAQ: AVNR) got a boost, shooting up 7.35 percent to $ 4.38 on Piper Jaffray comments.

Packaging Corporation of America (NYSE: PKG) was also up, gaining 10.78 percent to $ 60.43 after the company announced its plans to acquire Boise for $ 12.55 per share.

Equities Closed DOWN
Shares of The ExOne (NASDAQ: XONE) got crushed, falling 8.78 percent to $ 50.80 as shares continued to fall after the company’s secondary offering at $ 62 per share on Friday.

Apple (NASDAQ: AAPL) down, fell 3.18 percent to $ 450.12 after sales of the new iPhone 5C were shrouded in mystery, much to the concern of traders. Apple shares have dropped 33.56 percent over the past 52 weeks.

Industrial production was the only significant piece of economic data to come out today.The metric showed 0.4 percent growth on August compared to July, but economists were looking for 0.5 percent. However, this is a big jump from July, which showed no growth.

Two shooters who are allegedly still at large killed 12 people in a navy ship yard in Washington DC. Officials are urging the public to stay indoors.

The CBOE measure of volatility (VIX) was mostly unchanged on the day, up 0.35 percent to 14.22 nearing the close.

The U.S. dollar was basically unchanged on Tuesday. Heading into the close, the PowerShares DB US Dollar Index Bullish ETF (NYSE: UUP), which tracks the performance of the greenback versus a basket of foreign currencies, was down 0.25 percent to $ 21.93.

The closely watched EUR/USD pair was last up 0.32 percent to $ 1.3337. Other movers included the AUD/USD which rose 0.75 percent and the USD/Turkish Libra, which dropped 1.28 percent.