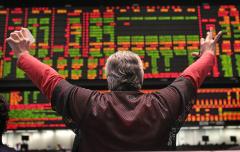 September’s unemployment rate was announced as 7.2 percent, compared to 7.3 percent in August. Despite the drop, only 148,000 non farm jobs were added for the month, while economists were expecting 180,000. 126,000 of these positions were in the private sector.

Whirlpool (NYSE: WHR) gained 11.62 percent to $ 146.19 after the company reported a strong rise in its third-quarter earnings.

Netflix (NASDAQ: NFLX) dropped 9.15 percent to $ 322.47 as traders suddenly questioned the strength of the company’s earnings fueled rally and rushed for the exits.

Asian markets were mostly down last night. The Shanghai index fell 0.83 percent with Hong Kong’s Hang Seng down 0.52 percent. Japanese markets were actually up, with the Nikkei gaining 0.13 percent.

Currencies
The US dollar once again tanked on the expectation that the Federal Reserve will not reduce its stimulus. The PowerShares ETF (NYSE: UUP) that tracks the performance of the greenback versus a basket of foreign currencies fell 0.56 percent to 21.35. The marks a year low for the dollar.