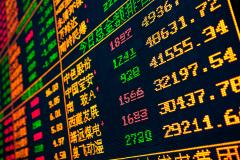 Top Headline
Home Depot (NYSE: HD) reported a 43% gain in its fiscal third-quarter profit and lifted its forecast for the year.

Equities Trading UP Tile Shop Holdings (NASDAQ: TTS) was on the rise throughout Tuesday’s session, gaining 6.53 percent to $ 17.39 despite a Citigroup report downgrading the company saying it will take time for shares to recover.

Shares of Brocade Communications Systems (NASDAQ: BRCD) got a boost,shooting up 9.20 percent to $ 8.84 after the company reported a better-than-expected Q4 profit.

United Airlines (NYSE: UAL) was up as well, gaining 4.43 percent to $ 37.99 after the company announced it would roll out a program to cut costs by $ 2 billion annually.

Equities Trading DOWN Shares of Oiltanking Partners LP (NYSE: OILT) were down 9.60 percent to $ 58.25 after the company priced an offering of 2.6 million common units.

Best Buy Co (NYSE: BBY) shares tumbled 9.94 percent to $ 39.23 after the company swung to a profit in the fiscal third-quarter profit.

Stratasys (NASDAQ: SSYS) was down as well, falling 8.00 percent to $ 118.00 following a rally Monday, possibly linked to a market wide selloff of higher beta names as fear gripped the street.

Economics US employment cost index rose 0.4% in the third quarter, versus a 0.5% growth in the second quarter. However, economists were expecting a 0.5% growth.

The Johnson Redbook Retail Sales Index declined 0.7% in the first two weeks of November versus October.