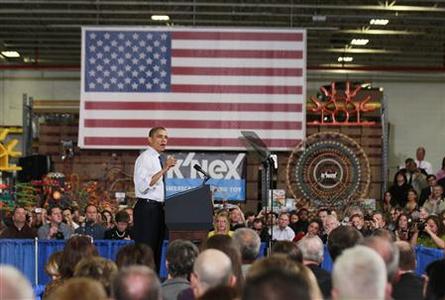 (Reuters) – President Barack Obama hit the road on Friday to turn up pressure on Republicans in the “fiscal cliff” talks, urging Americans to support his drive to raise taxes on the wealthy while extending tax cuts for the middle class.

In a Christmas-season visit to a toy factory, Obama portrayed congressional Republicans as Scrooges who risked sending the country over the fiscal cliff rather than strike a deal to avert the tax increases and spending cuts that begin in January unless Congress intervenes.

“If Congress does nothing, every family in America will see their taxes automatically go up on January 1,” Obama said at a factory that makes Tinkertoys, among other things, in suburban Philadelphia. “That’s sort of like the lump of coal you get for Christmas. That’s a Scrooge Christmas.”

At immediate issue is whether the tax cuts that originated under former President George W. Bush should be extended beyond December 31 for all taxpayers including the wealthy, as Republicans want, or just for taxpayers with income under $ 250,000 as Obama and his fellow Democrats want.

At The Rodon Group factory, which makes K’NEX building toy systems as well as Tinkertoys and consumer products, Obama said Americans should urge Republicans to extend the tax cuts for all but the wealthy, which would cover 98 percent of the public, and relieve public concern about a tax rise that economists say could throw the country back into a recession.

“We already all agree, we say, on making sure middle-class taxes don’t go up. So let’s get that done. Let’s go ahead and take the fear out for the vast majority of American families so they don’t have to worry,” Obama said.

‘THERE IS A STALEMATE’

In Washington, House of Representatives Speaker John Boehner said increasing tax rates on anyone was the wrong approach and said Obama had not been serious in the fiscal cliff negotiations.

“There is a stalemate. Let’s not kid ourselves,” the Ohio Republican said.

The equities market remained resilient Friday despite signs of a stalemate in Washington. Many investors bet a deal will be struck at the eleventh hour.

“There is no sign of it from the rhetoric but there are expectations it will happen,” said Steve Goldman, principal at Goldman Management in Short Hills, New Jersey. “The rhetoric will get worse before it gets better.”

Obama’s trip to Pennsylvania was part of a renewed public relations push on the fiscal cliff talks – an effort that has infuriated Republicans. Boehner called it a “victory lap” on Thursday as he rejected Obama’s proposals to avoid the cliff.

“It tells you he’s not interested in negotiating. He’s more interested in traveling around the country trying to campaign,” Representative Jim Gerlach, a Pennsylvania Republican, said on CNBC on Friday.

Treasury Secretary Timothy Geithner, Obama’s lead negotiator in the talks, will make the rounds of television talk shows on Sunday.