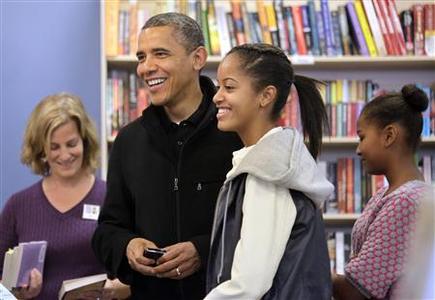 (Reuters) – President Barack Obama, in a bid to show support for small businesses, took his daughters on an early Christmas shopping trip on Saturday as the U.S. retail sector swings into high gear this holiday season.

“Preparation,” said Obama, while talking to the store owner at the front counter and looking at his BlackBerry, apparently checking book titles while his daughters stood at his side. “That’s how I shop.”

Over the last two decades, small businesses have created two of every three U.S. jobs. To try to spur job growth, the Obama administration says it aims to cut taxes for small businesses and expand entrepreneurs’ access to financing.

Both Main Street merchants and larger retailers will find out soon if the so-called fiscal cliff that threatens to produce tax increases and automatic spending cuts in January will subdue shoppers and hold back spending this holiday season.

Congress and Obama are about to negotiate on a deal to avert the roughly $ 600 billion in tax increases and spending cuts set to start jolting the economy at the beginning of 2013.

Asked by reporters what is needed to cushion the economic impact of the looming fiscal cliff, Obama declined to answer, saying “we’re doing Christmas shopping.”

The White House said Obama bought 15 children’s books that will be given as Christmas gifts to family members.

Last year, more than 100 million Americans shopped locally on Small Business Saturday, according to an estimate by American Express.

Taking to Twitter himself after the shopping excursion, Obama wrote: “My family & I started our holiday shopping at a local bookstore on #SmallBizSat. I hope you’ll join & shop small this holiday season.”

The nationwide initiative that urges customers to open their wallets to local businesses follows Black Friday, one the nation’s busiest shopping days at major retailers falling the day after Thanksgiving.

The Monday after Thanksgiving is known as Cyber Monday, where deals are found on the Internet and is more often a hit with shoppers unwilling to brave long lines.