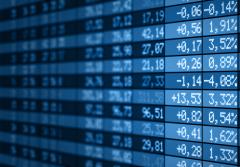 Oracle (NASDAQ: ORCL), which last week announced it would acquire DataRaker, is scheduled to report its second-quarter fiscal 2013 results Tuesday, December 18, after the markets close. Investors will be looking for the company, with its push into cloud computing, to get back on track after last quarter’s revenue decline ended a string of increases.

Analysts on average predict that Oracle will report revenue for the quarter that rose about 2.5 percent year-over-year to $ 9.03 billion. Per-share earnings are expected to come to $ 0.61, which would be up from $ 0.54 per share in the same quarter of last year. That consensus earnings estimate has remained unchanged in the past 60 days. Oracle has fallen short of earnings expectations in just one of the past eight quarters; first-quarter EPS were in line with the analysts’ average forecast.

Despite the lower revenues and in-line EPS in the first quarter due to lackluster performance from the hardware segment, the company said new software licenses and cloud software subscriptions sales grew, the operating margin increased and operating cash flow hit a record high. The board of directors declared a quarterly cash dividend. But the share price pulled back more than four percent in the days following the first-quarter report.

Looking ahead to the current quarter, the analysts’ consensus forecast calls for sequential and year-over-year growth in both EPS and revenue. So far, full-year EPS are expected to be about seven percent higher, relative to the previous year, on a rise of almost three percent in revenues.

Oracle makes, markets, hosts and supports database and middleware software, applications software and hardware systems. It is the third-largest software maker by revenue, after Microsoft (NASDAQ: MSFT) and IBM (NYSE: IBM), and it has a market capitalization near $ 154 billion. The company is based in Redwood City, California, and Larry Ellison has been the chief executive since it was founded in 1977.

Competitors include IBM, Microsoft and SAP (NYSE: SAP). All three are scheduled to share quarterly results in January. Analysts forecast IBM will post strong EPS growth but a slip in revenues, Microsoft will say EPS slipped while revenues ticked up, and SAP will report double-digit percentage growth in both earnings and revenue.

Of the 43 analysts surveyed by Thomson/First Call who follow the stock, 29 recommend buying shares and none recommend selling. The analysts believe the stock has some room to run as their mean price target represents almost 11 percent potential upside. That target price would be a level the shares have not seen since May 2011.

Shares are up more than 23 percent since the beginning of the year, despite declining for much of the past quarter. The share price is above the 200-day and the 50-day moving averages. Over the past six months, the stock has outperformed IBM and Microsoft, as well as the broader markets.