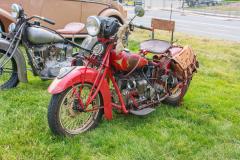 Does Harley Davidson (NYSE: HOG) have to worry about the new line of Indian motorcycles recently rolled-out by Polaris Industries (NYSE: PII)?

Harley is an American icon, and recently celebrated its 110th birthday. But the Indian line also has a venerable tradition, going back to 1901.

Indians were considered a classic racing bike for decades, until – according to the American Motorcyclist Association’s website – competition from cheaper, post-war imports forced the original company to cease motorcycle production in 1953.

A number of unsuccessful attempts were made in the ensuing years to revive the Indian brand. But in April of 2011 it was purchased by Polaris, and according to the Los Angeles Times the power sports company vowed to revive the Indian motorcycle tradition, and its lucrative brand.

“We thought Indian was a great opportunity to create a high-quality bike with classic styling, true heritage and modern technology,” Steve Menneto, Polaris’ vice president of motorcycles, told the newspaper.”We wanted a great cruiser with real value, but it had to be a quintessential Indian.”

The new Indians incorporate the iconic stylings of their famous predecessors but also have the high-tech bells and whistles motorcycle riders look for these days – including a keyless ignition, cruise control, an advanced audio system and an electronically adjustable wind shield.

Polaris also produces Victory motorcyles as well as off-road vehicles, snowmobiles and jet skis. The company had $ 3.2 billion in revenue last year, and the L.A. Times says it’s on track to show up to 16 percent in growth for 2013. Polaris will reportedly have lined up 140 U.S. dealers for its Indian brand by year’s end.