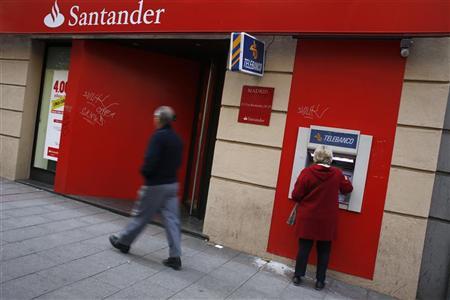 A woman uses an ATM machine at a Santander bank branch in Madrid October 16, 2012.

By Sonya Dowsett and Carlos Ruano

(Reuters) – Spain’s Santander (SAN.MC) plans to invest in the country’s so-called bad bank in a sign that healthy domestic lenders are willing to support the entity created to clean up the aftermath of a 2008 property crash.

“The bank plans on investing in the bad bank,” a spokesman for Santander, Spain’s biggest bank, told Reuters on Saturday.

Spain has set up the bad bank to siphon off toxic real estate assets from bank balance sheets that date from the property crash. The bad bank’s creation is a condition of receiving up to 100 billion euros ($ 127 billion) of aid in a European bail-out of the country’s financial sector.

Spain’s second biggest bank, BBVA (BBVA.MC), is considering investing in the vehicle, but has yet to make a decision, a BBVA spokesman told Reuters on Saturday.

Sabadell (SABE.MC) is also considering investing but has not yet made a decision, a Sabadell spokesman said.

The bad bank’s managers are currently in talks with BBVA, Sabadell and Barcelona-based Caixabank (CABK.MC) about them investing in the vehicle, a banking source said. Caixabank was not immediately available for comment.

An Economy Ministry source said on Friday the bad bank could go ahead just with backing from domestic investors but foreign investors would give it credibility.

The bad bank will initially have equity of 3.9 billion euros. But the government needs private investors to stump up 2.2 billion euros, or 55 percent of this, in December, the Economy Ministry source said on Friday.

Private sector support is key because the government wants to keep its stake in the bad bank below 50 percent to reduce the burden on state finances.

The bad bank, known as Sareb, will initially receive assets – such as soured loans to housebuilders and foreclosed property – from four state-rescued banks, including Bankia (BKIA.MC), worth 45 billion euros. It will have a maximum asset value of 90 billion euros.

The equity in the bad bank could rise to 5 billion euros after including assets from a further group of banks, aside from those taken from the state-rescued banks, the source said.

The government hopes eventually to capture 500 million euros of investment from foreign investors, or 10 percent of the final equity tranche.

The rest of the bad bank will be financed by senior state-backed bonds.

Government sources said on Friday that Spain’s bank restructuring fund, the FROB, could use part of the European aid to invest in the bad bank, and as such, would not need to tap markets.