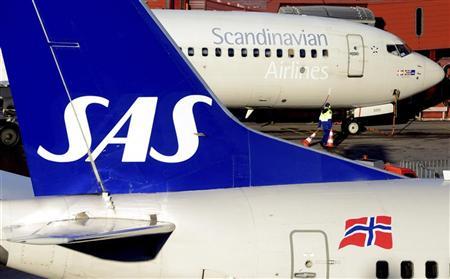 (Reuters) – Talks between SAS (SAS.ST) and unions on wage cuts which the airline says are vital to its survival failed to yield an agreement as a Sunday deadline loomed, the company said.

The Scandinavian airline, hit by competition from lower-price rivals, last week announced plans to cut some salaries by up to 17 percent and reduce headcount to about 9,000 from 15,000.

It began talks on Thursday to persuade unions to accept pay cuts and new employment conditions which SAS says are necessary to secure fresh funding.

Analysts doubt the measures will secure the independence of the airline which they say has a structure designed more to secure jobs and Nordic solidarity than generate profit and which has hamstrung its ability to compete with discount carriers like Ryanair (RYA.I) and regional rival Norwegian Air Shuttle (NWC.OL).

SAS, half-owned by Denmark, Sweden and Norway, said negotiations continued ahead of a SAS board meeting planned for later on Sunday but no agreement had been reached with any union.

“There needs to be a solution before the board meets later today, Sunday. At the meeting the board will decide whether the conditions exist to carry out the plan,” SAS said.

“Until the board meeting there is intensive work to reach a deal about new collective agreements,” it said.

SAS spokeswoman Elisabeth Manzini said the board would decide the next steps if the deadline was not met.

She declined to say how long SAS’s cash would last or at what time the board was scheduled to meet.

A new credit facility worth around 3.5 billion crowns is being provided by seven banks and the governments of Denmark, Sweden and Norway, but is conditional on unions agreeing to the wage cuts.