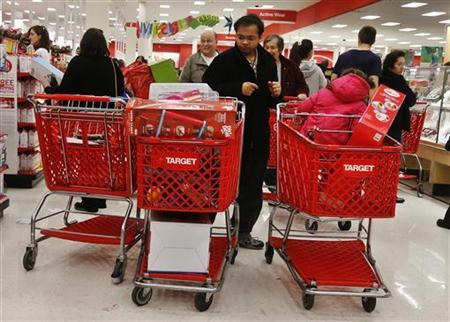 People shop at a Target store in Westbury, New York November 23, 2012. Black Friday, the day following the Thanksgiving Day holiday, has traditionally been the busiest shopping day in the United States.

By Jessica Wohl and Alistair Barr

(Reuters) – Online shopping has grown sharply so far this holiday shopping season after U.S. retailers pushed out a slew of mobile and Internet deals that lured consumers before Cyber Monday, traditionally the biggest day for e-commerce in America.

While it remains to be seen if the gains over Thanksgiving Day and Black Friday can be sustained, the latest estimates show shoppers scooping up early special offers via their smart phones and tablets, the way they used to hunt for bargains in brick-and-mortar stores.

Online sales increased 17.4 percent on Thanksgiving and 20.7 percent on Black Friday, compared with 2011, according to IBM Smarter Commerce, a unit of International Business Machines Corp that analyzes transactions from 500 U.S. retailers.

Black Friday, the day after Thanksgiving, had traditionally been the kickoff to the holiday season for stores. This year, retailers such as Wal-Mart Stores Inc. and Target Corp. made their biggest push ever with special offers during the holiday itself.

“The Thanksgiving creep revitalized the thrill for people,” said Wendy Liebmann, chief executive of WSL Strategic Retail. “It got people excited to go out. But it pulled a lot of sales forward.”

Visits to stores rose 3.5 percent on Friday, down from a 4.7 percent increase last year, ShopperTrak estimated.

Sales actually fell an estimated 1.8 percent, the company, which analyzes store traffic, said. But if Thursday sales were added in, ShopperTrak estimates that “Black Friday” sales would have been up a little less than 1 percent from a year earlier.

Cyber Monday, which follows the long holiday weekend, has been the biggest day for online shopping in recent years, as workers return to their office computers.

Now, armed with mobile devices, particularly Apple Inc’s iPad and iPhone, shoppers are no longer waiting. They are also using the devices to track down the lowest prices.

The average order value on Black Friday declined by 4.7 percent to $ 181.22, and the average number of items per order dropped 12 percent to 5.6, according to IBM.

“What we don’t know is whether this is a zero-sum game or whether there is some benefit to retailers by broadening the holiday shopping window,” Best said. “There is risk that real growth in retail for the entire holiday may be overestimated based on these early numbers.”

“The online players are definitely participating more on Thanksgiving and Black Friday, so Cyber Monday is being shared with other holidays now,” said Scot Wingo, chief executive ChannelAdvisor.

EBay usually grows more slowly early in the holiday season and then ramps up later as retailers run out of hot products and shoppers turn to eBay sellers for those items.

Its strong start this year is driven partly by the company’s success in attracting mobile shoppers through shopping apps on smart phones and tablets, Wingo said.

EBay said on Saturday that the volume of mobile transactions on its online marketplace jumped 153 percent on Black Friday, compared with a year earlier. PayPal, the payments division of eBay, saw Black Friday volume almost triple, year over year.

More broadly, purchases from mobile devices accounted for 16.3 percent of online sales on Black Friday, up from 9.8 percent in 2011 and 3.2 percent in 2010, according to IBM data. Apple Inc’s iPads and iPhones led the charge, with owners using the devices to browse and buy on retailer websites.

Among tablets, iPads were the clear leader, generating 88.3 percent of traffic to retailers’ sites on Friday, followed by Barnes & Noble Inc’s Nook with 3.1 percent, Amazon.com Inc’s Kindle with 2.4 percent and the Samsung Galaxy with 1.8 percent, IBM said.

At the mall, stores continued to use discounts to lure shoppers on Saturday, with Aeropostale Inc discounting items as much as 70 percent after a storewide 60 percent discount on Friday.

“The discounts were reasonable but didn’t take your breath away,” said Liebmann. “Retailers are being cautious.”

The Garden State Plaza Mall in Paramus, New Jersey, appeared to be crowded on Saturday, although much quieter than on Black Friday, clerks at several stores said.

Vanessa Crenshaw, a 45-year-old accountant shopping at JC Penney, said that if stores pulled back on discounts, she would go elsewhere.

“You can always find a deal, someone will have a deal,” she said.