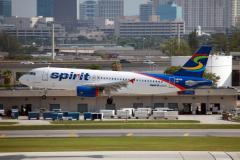 With the summer travel season well underway, the short interest in most U.S.-based airlines dwindled.

Note that American Airlines remains in bankruptcy, pending completion of its merger with U.S. Airways.

Here is a quick look at how Alaska Air Group, Allegiant Travel and Spirit Airlines have fared and what analysts expect from them.

The number of shares sold short in this Seattle-based regional airline retreated more than 30 percent to 3.74 million shares, which represented more than five percent of the total float. That was the lowest level of short interest so far this year. Days to cover remains more than three.

In early July, Alaska Air raised prices and initiated a quarterly dividend. The company has a market capitalization of more than $ 4 billion and a dividend yield of 1.3 percent. The long-term earnings per share (EPS) growth forecast is more than 13 percent, and the return on equity is more than 22 percent.

Nine of the 14 analysts who follow the stock that were surveyed by Thomson/First Call recommend buying shares, four of them rating the stock at Strong Buy. Their mean price target, or where analysts expect the share price to go, is about 13 percent higher than the current share price. That would be a new multiyear high.

The share price has retreated about five percent from the 52-week high reached at the end of March, but shares are still up approximately 38 percent year-to-date. The stock has outperformed JetBlue and Southwest, as well as the S&P 500, over the past six months.

The short interest in this Las Vegas-based travel company fell more 20 percent from the previous period to about 860,000 shares. That was the first time it was less than a million shares sold short in the past year. More than five percent of Allegiant’s shares were sold short. The days to cover fell to less than six.

Allegiant announced a new nonstop flight to Hawaii during the period. The company has a market cap of less than $ 2 billion, but it does not offer a dividend. The long-term EPS growth forecast is about 21 percent, and the return on equity is almost 27 percent. The operating margin is greater than the industry average.

The consensus recommendation of analysts has been to hold Allegiant shares for the past three months. Analysts see a little headroom for shares, as their mean price target is more than five percent higher than the current share price. That target is less than the recent 52-week high, though.

The share price pulled back about nine percent last week following the second-quarter report. But the share price is still up more than 25 percent year-to-date. Over the past six months, the stock has outperformed competitor Southwest Airlines and the broader markets.

Shares sold short in this Florida-based regional carrier jumped more than 53 percent during the period to more than 1.74 million, the highest level of short interest since last September. The number of shares sold short was about three percent of the float by mid-July. Days to cover rose from one to four.

This ultra-low-cost carrier with its main hub in Ft. Lauderdale has a market cap of more than $ 2 billion. Analysts expect EPS in the current quarter to be up more than 36 percent year-over-year. The company’s return on equity is more than 24 percent, and the long-term EPS growth forecast is more than 25 percent.

All but one of the 12 analysts polled recommend buying shares, with four of them rating the stock at Strong Buy. The mean price target represents less than eight percent potential upside, relative to the current share price. That consensus target would be a new multiyear high, though.

The share price has risen almost 14 percent in the past month, and it reached a new 52-week high last week. It has risen about 98 percent since the beginning of the year. Over the past six months, the stock has outperformed competitor JetBlue and the broader markets.