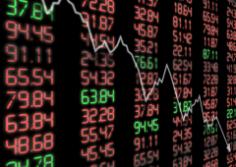 Finally, investors might get some relief from the politically-charged headlines.

On Tuesday, Dow component Alcoa (NYSE: AA) will release its most recent financial results. Earnings releases from the aluminum producer are traditionally seen as signalling the start of earnings season.

Bank of America notes, “Despite aluminum’s recent strength, oversupply remains a concern and we believe AA will continue to focus on cost cutting, productivity improvements, and ramping up of its minority stake Saudi Ma’aden JV project.”

Alcoa has been a poor investment in recent years. Shares were trading near $ 40 before the 2008 financial crisis and resulting stock market collapse. But unlike many other Dow components, Alcoa never fully recovered, and is still down about 75 percent.

Buffett famously remarked that, if he had the means to do it, he would purchase millions of single family homes and rent them out as an investment. On a practical basis, such an investment would be impossible.

Rather, Buffett invests in housing by investing in Wells Fargo. That worked well in 2012, when shares rallied about 20 percent.

Goldman Sachs doesn’t care for the bank ahead of its earnings report. On Thursday, Goldman downgraded shares of Wells Fargo to Neutral.

Goldman writes, “While we still believe that WFC is uniquely positioned to take advantage of the refinance wave, exposure to mortgage banking should be less of a benefit into 2014.” Grocery store SuperValu (NYSE: SVU) also reports during the week, on Thursday, but its earnings might not be the only thing the company has to announce.

Shares spiked nearly 20 percent on Friday after The Wall Street Journal reported that Cerberus Capital Management was close to a deal that would see it acquire parts of the company.

In a note released Thursday, Citigroup notes that SuperValu has been rapidly closing the game in price between its offerings and Walmart’s (NYSE WMT).

In terms of economics, releases in the U.S. will be relatively light next week. More important will be international releases.

Thursday will be a key day on the economics front, with both the Bank of England and the European Central Bank releasing decisions on interest rates. Overnight Thursday will bring data on Chinese inflation.

With the fiscal cliff set aside, and the global election cycle finally finished, the first full week of January might offer investors a chance to follow more fundamental business activity.