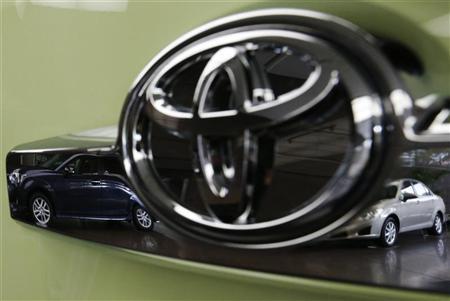 Toyota’s Corolla Fielder (L) and Corolla Axio are reflected in a Toyota Forte’s logo at the company’s headquarters in Tokyo November 5, 2012.

(Reuters) – Toyota Motor Corp (7203.T) is set to delay the launch of a new production line at its plant in Tianjin, northern China, because a decline in its Chinese sales is likely to continue for the foreseeable future, Japan’s Asahi newspaper reported on Sunday

Toyota had hoped to complete its new fourth line at the plant, with annual capacity of 200,000 vehicles, around December 2014. The Asahi report, which did not cite any sources, said recovery of Toyota’s sales in China would determine a new schedule for the production line.

The company is also considering a similar delay for the launch of a third production line, with capacity of about 200,000 units, at its plant in Guangzhou, southern China, the report said. That launch is currently set for 2015.

Its sales in China have been hit by a territorial dispute in the East China Sea.

Protests and calls for boycotts of Japanese products broke out across China in September after Japan nationalized two of a group of disputed East China Sea islands, known as the Diaoyu in Chinese and the Senkaku in Japanese, by purchasing them from their private owners.

Last week, Toyota said sales in China, the world’s biggest auto market, fell 22 percent in November from a year earlier. That follows drops of 44 percent in October and nearly 50 percent in September.