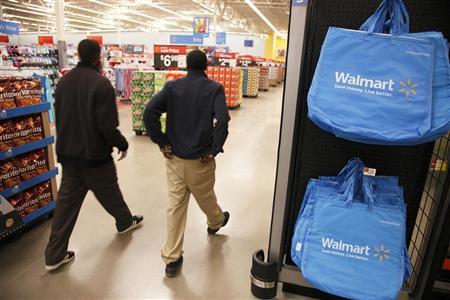 Workers walk through a new Wal-Mart store in Chicago, January 24, 2012.

(Reuters) – Wal-Mart Stores Inc is taking its first legal step to stop months of protests and rallies outside Walmart stores, targeting the union that it says is behind such actions.

Wal-Mart late on Thursday filed an unfair labor practice charge against the United Food and Commercial Workers International Union, or UFCW, asking the National Labor Relations Board to halt what the retailer says are unlawful attempts to disrupt its business.

The move comes just a week before what is expected to be the largest organized action against the world’s largest retailer, as a small group of Walmart workers prepare to strike on Black Friday, typically the busiest shopping day of the year.

“We are taking this action now because we cannot allow the UFCW to continue to intentionally seek to create an environment that could directly and adversely impact our customers and associates,” said Wal-Mart spokesman David Tovar. “If they do, they will be held accountable.”

The union is undeterred. “Walmart is grasping at straws,” said UFCW Communications Director Jill Cashen. “There’s nothing in the law that gives an employer the right to silence workers and citizens.”

Protests and rallies outside Walmart stores around the country and other actions such as flash mobs have been orchestrated by groups including OUR Walmart, a coalition of thousands of Walmart workers which wants to collectively push for better wages, benefits and working conditions.

OUR Walmart and another group, Making Change at Walmart, are affiliated with the UFCW. The union represents more than 1 million workers, including many at retailers that compete with Walmart. According to a filing with the Labor Department, OUR Walmart was a subsidiary of the UFCW as of 2011. It is unclear whether it remains a subsidiary or has legally separated from the union.

Numerous activities over the past year or longer “have caused disruptions to Walmart’s business, resulted in misinformation being shared publicly about our company, and created an uncomfortable environment and undue stress on Walmart’s customers, including families with children,” Walmart outside counsel Steven Wheeless said in a letter sent on Friday to Deborah Gaydos, assistant general counsel of the UFCW.

The National Labor Relations Act prohibits such picketing for more than 30 days without the filing of a representation petition. The NLRA also requires the NLRB to seek a federal court injunction against such activity, the letter states.

The OUR Walmart group of current and former Walmart employees is organizing its most public displays yet against the Walmart chain, with 1,000 protests such as strikes and what it calls “online actions” that began this week and will culminate on Black Friday.

Strikes and protests have been planned across the country. For example, workers walked off the job in Seattle on Thursday and in Dallas on Friday as part of this effort, OUR Walmart said.

Bentonville, Arkansas-based Wal-Mart said that anyone who is not an employee is prohibited from coming onto its owned or controlled parking lots or other facilities to solicit, hand out literature or otherwise engage in any demonstration.

Wal-Mart said that it intends for the UFCW to be held accountable for any injury or property damage that may occur as a result of the actions led by the UFCW, OUR Walmart or any of its other affiliates.

“We are prepared to and will take all appropriate legal actions to enforce our property rights, protect our business, and ensure the safety of our customers and associates, on Black Friday and in the future,” the letter states.

OUR Walmart has said that it has thousands of members across most U.S. states, but has not given an exact number of members. Walmart store workers pay $ 5 monthly dues to join OUR Walmart.

Wal-Mart filed its charge against the UFCW late on Thursday with the NLRB regional office in Little Rock, Arkansas. The case number is 26-CB-093342.

(Reporting by Jessica Wohl in Chicago; Editing by Tim Dobbyn)