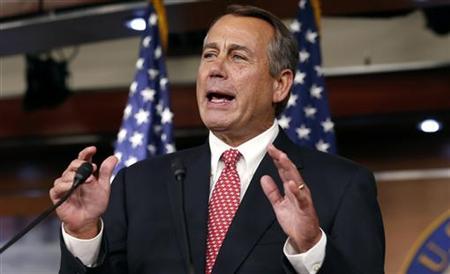 Speaker of the U.S. House of Representatives John Boehner speaks to reporters in the Capitol in Washington December 13, 2012.

By Thomas Ferraro and Steve Holland

(Reuters) – President Barack Obama is not ready to accept a new offer from the Republican leader of the U.S. the House of Representatives to raise taxes on top earners in exchange for major cuts in entitlement programs, a source said late Saturday.

The shape and details of Boehner’s offer were uncertain Saturday night, as was the exact reason the president was prepared to reject it.

The source said Obama sees the offer made on Friday by U.S. House Speaker John Boehner as a sign of progress, but simply believes it is not enough and there is much more to be worked out before Obama can reciprocate.

Tax rates and entitlements are the two most difficult issues in the so-far unproductive negotiations to avert the “fiscal cliff” of steep tax hikes and spending cuts set for the new year unless Congress and the president reach a deal to avoid them.

The Boehner offer is the first significant sign of a shift in the Republican insistence that low tax rates set to expire on December 31 be extended for all taxpayers, and comes at some risk to the speaker.

Conservatives, particularly Tea Party-supported Republicans, see opposition to tax increases for anyone as an abandonment of party principles, and of the Republican base.

Obama wants high earners – those earning roughly $ 250,000 a year or more – to pay higher taxes in order to put the burden of deficit reduction on those he says can best afford it.

Republicans have privately spoken of coming back at Obama with a threshold of $ 1 million. Obama has previously called that unacceptable because it would not raise enough money on its own to cut the deficit significantly or provide enough money to avert across-the-board spending cuts.

On entitlements, the president faces pressures of his own from Democrats, who see protecting Medicare, the government health insurance program for seniors, as a bedrock principle.

A major bloc of congressional Democrats has already signaled they will not accept major cutbacks in Medicare as part of any deal.

It was unclear on Saturday if the president had communicated his response to Boehner.

NOT A COMPLETE SURPRISE

Boehner’s shift did not come as a complete surprise. Recent polls have suggested little public support for his position and he has been getting pressure from Senate Republicans to be more flexible.

The massacre in Connecticut silenced fiscal cliff talk in public on Saturday as the both sides got ready for a final scramble, with sessions of the House now scheduled just days before Christmas.

Obama canceled a trip he had planned to make next Wednesday to Portland, Maine, to press his case for tax hikes for the wealthy. He is heading on Sunday to Newtown, the site of Friday’s school shootings, in which a gunman killed 20 children and six adults before taking his own life. The gunman also killed his mother, according to police.

Boehner of Ohio canceled the standard Republican radio response on Saturday to Obama “so that President Obama can speak for the entire nation at this time of mourning,” he said in a statement issued late on Friday.

The moratorium on cliff pronouncements masked a growing recognition the two sides could remain deadlocked at the end of the year on the key sticking points – taxes and entitlements.

Senate Republicans prodded their counterparts in the House to beat a retreat on tax hikes, in a fashion that would allow Obama’s proposal to pass the Republican-controlled House while allowing Republicans to cast a face-saving vote against it.

Republicans could then shift the debate onto territory they consider more favorable to them, cutting government spending to reduce the deficit.

“Just about everyone is throwing stuff on the wall to see if anything sticks,” one Republican aide said in reference to various proposals being discussed on how to proceed.

Alluding to public opinion polls, the aide added: “We know if there is no deal, we will get blamed.”

However, Republican leaders in both chambers are leery about seeming to cave on taxes. “There’s concern that if we did that, Obama would simply declare victory and walk away and not address spending,” said one aide. “We don’t trust these guys.”

Some of the prodding was coming from Senate Minority Leader Mitch McConnell of Kentucky.

Don Stewart, a McConnell spokesman, said the minority leader in the Democratic-controlled Senate hasn’t embraced any single plan, but has discussed and circulated measures offered by fellow Senate Republicans.

“Senator McConnell does not advocate raising taxes on anybody or anything,” Stewart said.

“We’re focused on getting a balanced plan from the White House that will begin to solve the problem of our debt and deficit to improve the economy and create American jobs,” said Boehner spokesman Michael Steel.

“Right now, all the president is offering is massive tax hikes with little or no spending cuts and reforms,” Steel said.

House Majority Leader Eric Cantor scheduled “possible legislation related to expiring provisions of law,” a reference to the expiring tax cuts, for the end of the week, portending a weekend session.

Cantor has said the House would meet through the Christmas holidays and beyond.

Hopes expressed after the November 6 general election of some “grand bargain” on deficit reduction have all but disappeared, at least for this year.

This is partly because time is running out and partly the result of growing warnings from Democrats in Congress that they would not support big changes in the Medicare program, the government-run health insurance program for seniors that is a major contributor to the government’s debt.

Asked if she was drawing a “red line” around that idea, Pelosi said her comments were “something that says, ‘don’t go there,’ because it doesn’t produce money.